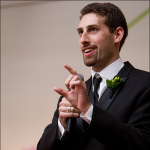 Bureaucrat Founder
40,045 Edits since joining this wiki
April 6, 2006
Please leave a message on my talk page or email me (requires Wikia account) to get in touch.

I created LyricWiki in 2006 as a side-project for my startup. In 2009 it was acquired by Wikia. A few months later, Wikia convinced me to come along for the ride as a Senior Engineer and the General Manager of Lyrics.

I'm proud to be from Pittsburgh, Pennsylvania where the site is hosted. Check out some of our local legends such as The Clarks, Rusted Root, and Christina Aguilera.

I was born April 17, 1984. My formative years were spent at Hampton High School, Allison Park, Pennsylvania. I subsequently majored in Computer Science at the Rochester Institute of Technology. I left in the fall of 2006 to work fulltime on my software company, Motive Force LLC which was the parent company of LyricWiki until it was acquired by Wikia in 2009.

In mid-2009, LyricWiki became part of Wikia, the family of wikis, and then shortly after, I joined them too, as Engineer and General Manager, Lyrics. Later I became a Senior Engineer and the head of the Performance Team.

In fall of 2011, I founded BlueLine Game Studios which currently focuses on making video-games out of board games. We released Hive on Xbox 360, then later brought it to PC, Mac, and Linux on Steam.

After phasing out at Wikia and becoming full-time on BlueLine, I moved to the Raleigh/Durham area of North Carolina which is a big video-game hub. Now, I'm just happily churning away making video games!

Some of my favorite artists at the moment are Tool, A Perfect Circle, Linkin Park, Staind, Pearl Jam, The Prodigy, Pink Floyd, Eminem, Benny Benassi, Coldplay, Queen, Cake and Seether.

Retrieved from "https://lyrics.fandom.com/wiki/User:Sean_Colombo?oldid=28417492"
Community content is available under Copyright unless otherwise noted.