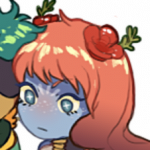 One fateful morning, a large group of forest and water spirits left their homes, hoping to catch Arachne at work. They came to watch her first dye the wool in vibrant colors and then spin delicate threads into works of unparalleled splendor. The spirits admired both the ease with which she worked as well as her creations. After several hours of diligent observation, one of the spirits approached Arachne and exclaimed, "Surely, you have been trained by the master herself, the goddess of all artistry, Athena."

"Ha! Athena has taught me nothing," Arachne replied. "I have taught myself everything that I know. Nothing has been given to me. My own talent and hard work have created these works of beauty." She turned angrily to the crowd of spirits with a look of reproach and held her hands out for all to see. "These hands are capable of achievements greater than the gods themselves," she spoke. The spirits gasped to hear her speak with such arrogance.

Word of Arachne's boastings rapidly spread through the village and the countryside until, eventually, Athena herself heard of the arrogant girl. Athena decided to warn Arachne of the danger of being insolent to the gods. Disguising herself as an elderly woman in tattered clothing, Athena traveled to Arachne's cottage.

There, Athena stood among a crowd of spectators and admired Arachne's work. She approached Arachne and said, "You are certainly entitled to strive to become the best artist among mortals. But be warned by the wisdom of an old woman: You should be more careful. These talents are a gift, and you should thank the goddess Athena rather than taunt her. Surely you know that the divinity of the gods cannot be touched by a mere mortal such as yourself."

Arachne responded with outrage. She leapt from her spinning wheel and shouted, "Save your advice for your grandchildren, old woman. If Athena were half the weaver I am, she would come down here and prove it!"

Upon hearing the girl's outburst, Athena lost her temper. She cast aside her disguise and revealed her identity. In all her glorious, glowering rage, the goddess stood among the group of onlookers. All around bowed down before her—all except Arachne, who offered no apology.

Athena turned to the people and ordered that two looms be brought forward for a competition. She declared, "Skill and technique shall be judged in this contest. The contest will end at sunset." After the looms were brought, the two weavers sat amidst a crowd of hushed spectators. Arachne appeared calm. Undaunted, she whispered to Athena, "Do you dare to weave against me?"

And so the shuttles flashed, in and out across the threads on the looms. Each weaver worked with skilled, enthusiastic fingers. As the day wore on, colors blended from one to another in breathtaking variety. It was as if light itself bent through the looms and was transformed into rolling rainbows as fine tapestries emerged.

Athena finished her tapestry first. It portrayed the story of a battle she had fought with Poseidon for control of the city of Athens. On one side stood Poseidon, striking the ground, producing a gushing spring of salt water. On the other side stood Athena, also striking the ground, creating a hole from which sprang a silvery olive tree. In each of the four corners of the tapestry, Athena wove stories of mortals who had faced terrible fates after challenging the gods. All agreed that the tapestry was a work of unsurpassed artistry. Arachne would be hard pressed to match its quality.

Shortly after, just as the last rays of the sun touched the horizon, Arachne finished her tapestry. Her tapestry depicted several scenes of the gods as well. In stark opposition to Athena's tapestry, Arachne's showed the gods at their worst moments. She had woven images that mocked and humiliated the gods' virtues and powers. Each scene displayed the gods and their victims in fabulous detail, more lifelike than any tapestry ever created. Arachne had created a border of flowers and ivy so lovely that some believed they could smell the blooms.

Athena stepped forward to examine this tapestry. She observed every detail as she searched for defects. When she found none, she called upon her servant, Envy, to examine the tapestry. Even Envy, after much observation, could find no thread out of alignment. Both tapestries were flawless. There was no disputing, however, that Arachne's tapestry was clearly more beautiful and artistic than that of the goddess Athena. Arachne was declared the winner of the contest.

Athena became outraged at being defeated by a mere human. She ripped Arachne's tapestry into tiny pieces. She turned to Arachne, determined to teach her a lesson. Smiling gruesomely at the mortal, Athena declared, "You shall be well rewarded for your pride." She sprinkled an herbal potion over Arachne, declaring, "Since you love to spin so very much, vain girl, you may spin forever."

Immediately, Arachne's hair began to fall from her head, and her ears and nose fell off. The girl's head and arms withered away, and her abdomen swelled. Eight long legs sprouted from Arachne's sides. She scurried away and, unable to restrain herself, started spinning silken threads into complex webs.

Retrieved from "https://lyrics.fandom.com/wiki/User:Aeries_Vholt?oldid=28425564"
Community content is available under Copyright unless otherwise noted.